I really like old churches: the musty smell that entwines you as you step in the door; the feast of art – statues, windows, frescoes, paintings; the furniture – decorative fonts, austere pews; little elevated preaching places like children’s castle turrets; the story-telling architecture; the soaring ceilings; the building materials themselves; the steps, worn to bowls in the centre, with the passing of masses of feet. I enjoy wandering the church yards with their lichened grave stones, grasses and blooms. As previously mentioned, Australia has a penchant for destroying old buildings so I am thankful to be in a place where humans have preserved something beautiful and meaningful.

Naturally, I had to go.

The BB generally finds the climbing of unhewn stone of greater interest than viewing it once it’s been made into buildings, however old, so I set off with a couple of friends for what turned out to be about four hours spread over five and a half churches.

The churches open at 10am so, as a result of our uninformed enthusiasm, we had a little wander beyond the village of Erilla Vall beforehand. Unfortunately, we were in the wrong place to stumble upon the Centre Romanic which bristles with information about the churches and which opens at 9am. 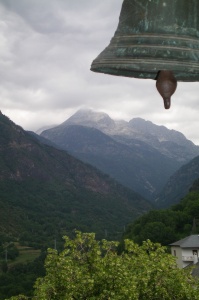 We had a glorious time anyway. The churches generally provide information by pamphlet and/or display. My companions pulled out and oiled up their rusty Spanish, painstakingly piecing together the signs while I read in English where that was an option. (One of them is fluent in two languages and Spanish is his third. The other has experience with a number of languages. I slid my extremely rudimentary German under the doormat and listened admiringly, as I always do in the presence of people with two or more languages – which seems like pretty much everyone in continental Europe.)

The churches in the valley were built in the late 11th and early 12th centuries by the lords of Erill as a show of power and social prestige. Structural changes were made throughout the centuries with churches growing, shrinking and changing shape. Restoration commenced in the 1900s. Between 1919 and 1923 mural paintings were removed from the churches by the Collective of Barcelona Museums to prevent collectors and foreign museums from nabbing them.

I was taken aback to see a photograph in one of the churches, of a worker chiselling away at a wall to remove a mural. The process, as one might expect, is a little less brutal than it first appeared.

The mural is protected with resin, laid over with layers of damp cloth soaked in organic water-soluble glue and allowed to dry. Then the chisels come out, cutting around the edges. The cloths are pulled off, bringing the mural with them. The whole thing is rolled up, carted down to Barcelona by mules, train and truck, unrolled and stuck onto another piece of cloth. Finally the glue is removed with hot water and…ja està, (Loosely: Catalan for ‘voila’) ready for a new place of residence.

The churches, basically variations on a theme architecturally, varied in their internal decorations. Sant Joan de Boi had the starkest altar of any church I have ever seen. 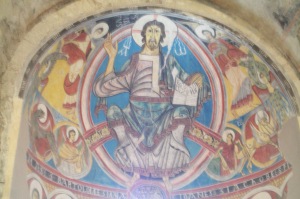 Of course, it may well have been covered in murals originally. Many copies of removed murals adorned the other walls. In contrast, the altar at La Nativitat in Durro, was almost gawdy. Finely carved and painted, it is an impressive sight. But it was the unexpected painting of God that blew me away (it seemed audacious to paint him) and the statue of a sweet-natured and down-to-earth  Mary (I could easily see her hoeing the garden, changing nappies and amusing her baby on a dirt floor) holding her miniaturised-adult Jesus in Sant Climent de Taüll, that I most warmed to.

And as for that half church, I mentioned – we couldn’t find the second church, actually a chapel or hermitage, in the village of Durro. A smiling local pointed over his shoulder up the hill and told us twenty minutes walk. With the two o’clock church closure deadline looming, we decided to take the car. We had a lovely drive but had to admit defeat after we’d searched for ten or more minutes. We found no sign of the building. I later found the simply fabulous Centre Romanic website which includes details of guided tour times. It had this to say: “Ermita de Sant Quirc de Durro – Chapel located 1.5 km from the town of Durro. A narrow paved forest track will take you there – it’s an easy, pleasant walk”. So walking may have been a better option.

The churches’ closure from 2 to 4pm was our signal to call it a day and have a Catalan lunch in a Boi restaurant, savouring more of the richness of the region.