Houses of Old Cardigans and Lego

Rural architecture in Switzerland and France. It’s like comparing children’s toy houses built out of lego in the conservatory, with those constructed yesterday in the sandpit using a few twigs for support.

It’s hard to say which is more appealing: 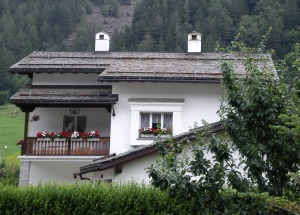 the clean, spruced precision of the Swiss model with carved wooden balconies and bright flower boxes 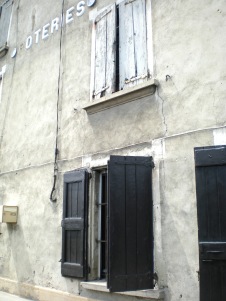 or the dilapidated and drab stone and render, teamed with aging timber, abundant in France.

Obviously a number of factors such as available resources, societal mores and aspirations, household income, technology and climate affect the nature of the houses we build. To what extent do dwellings reflect national character, if at all? (Is there really such an entity as national character anyway?) The differences between the architecture of countries, and indeed regions, is one of the aspects of travel that make it so interesting.

In Australia we have a short history of permanent, constructed dwellings; a predilection for tearing down any ‘old stuff’ we do have; and developers and consumers who are eminently satisfied creating and living in suburb after suburb of houses that are essentially the same. Although a few regions have developed their own distinct architectural style due to climate and resources, and some houses with historical or cultural distinction have survived, there seems to be a hell of a lot of ugly suburban houses around the nation that differ little from state to state.

So, I enjoy the local styles in Europe, however they come. And in rural France, in the areas I have visited, that style is ‘worn down’. It’s like great grandfather’s cardigan that has been passed down through the generations. It’s faded, it’s patched on the elbows, the collar is coming adrift, buttons are missing and there’s a bit of paint from that time he did the ceiling. But it’s comfortable and warm, the lining is still good and on the inside it has some great pockets of various sizes. Besides, everyone else is wearing their great-grandparent’s clothes too. No need for haute couture here. And there must be more important things to spend money on. 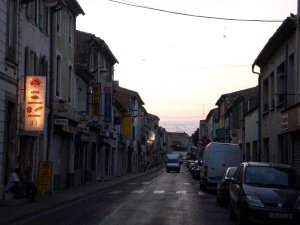 In France, we were fortunate to stay in the heart of St Gilles. In the evening, after sightseeing in the Camargue, we wandered the town. Even the canal boats, in other countries so colourful and well-cared for, were decrepit. It was only washing hung out to dry and gangplanks to the bank that convinced us the boats were still inhabited.

We scouted around for a patisserie as we wanted to make a run for Spain in the morning. The best we could find was this: 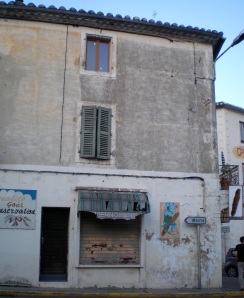 It looked like it had been abandoned for years and the sign featuring a 3D over-cooked baguette was the only reminder of its former glory as supplier of delicious sustenance. 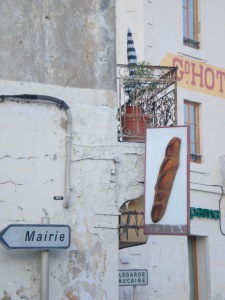 Next morning we came out to discover the patisserie in full flight. Unperturbed by its failing façade, it was doing a roaring trade.

And that was another of the beauties of this country – the morning. At about 7.30 we sat at a café sipping coffee, hot chocolate and tea with our bag of patisserie-bought goodies (a chocolate croissant, an apple tart made with flaky pastry and a round and flattish orange-flavoured cake-like affair with melted sugar on top that cracked off like pieces of thin ice), watching the French morning unfold around us. 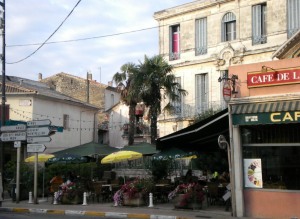 Here a man with two baguettes and two melons chatted to a passing cyclist; there a pregnant woman smoked (AAGGHHHHHH!) as she ambled down the street with her mate; a posse gathered at the cafe bar passing the time with a slow coffee before work; people emerged from the patisserie, clasping bags filled with breakfast.

It seemed so relaxed, especially as they would all stop work for a few hours in the afternoon and retire to the comfort of their quaint houses.

3 responses to “Houses of Old Cardigans and Lego”