It’s easy to receive accolades from the Swiss.

END_OF_DOCUMENT_TOKEN_TO_BE_REPLACED

What are they getting at here? They don’t want any wading? Or wading is fine so long as one doesn’t wear bathers?

Clearly, boating is quite acceptable provided no people are involved.

Posted in I Spy, I Hear, I Smell, I Taste, Switzerland

Mountain Danger – Not Where You Expect It.

END_OF_DOCUMENT_TOKEN_TO_BE_REPLACED

Posted in I Spy, I Hear, I Smell, I Taste, Switzerland

We missed the signs on the walk up. It was only when we got to the big red one lying on the rockface after the first short section of La Resgia via ferrata that we realised we would have to abandon. Birds and nature are not to be tampered with and the sign made it clear that we would be doing so if we proceeded. We were not to be there until the 1st July – two days hence – on account of nesting birds. (Perhaps they were on some sort of timed evacuation.) We departed sadly.

On the way down we met two Swiss folk who told us the fine was 300 CHF. They kept going regardless. Perhaps their Swissness was protection enough.

Fortunately, as you know by now, there was plenty to keep us occupied in the intervening time and we returned on the allotted day.

It is a great via ferrata for three reasons: END_OF_DOCUMENT_TOKEN_TO_BE_REPLACED

Tagged mountains, outdoor adventure, Pontresina, Swiss alps, Switzerland, travel, via ferrata, What to do in Bergun

As one wanders around Bergun, Switzerland, one asks oneself, ‘Could I do that? 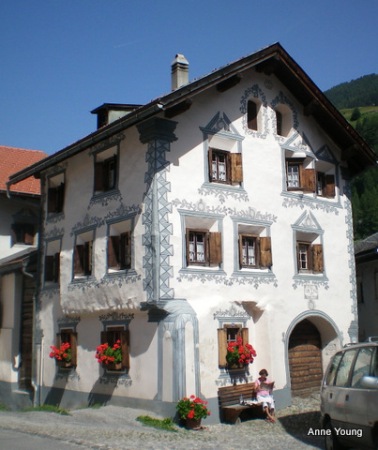 ‘Could I transform my house into a creation, a work of art, a pleasure and inspiration to me and those who see it? Could I show my aspirations, my heritage, my values – cryptically or with clarity – on my abode?’ END_OF_DOCUMENT_TOKEN_TO_BE_REPLACED 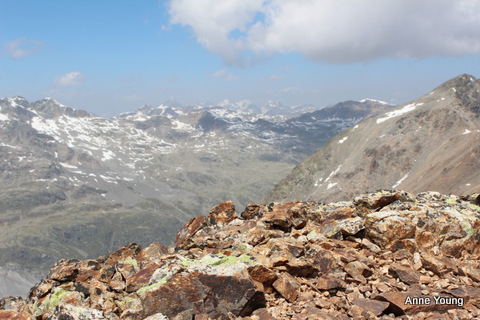 Yes, this is the original (perhaps we will say in years to come, ‘and still the best’) The World Is My Cuttlefish cairn. It is at the top of Piz Trovat, introduced in my last post.

In this steadfast and jaunty box: END_OF_DOCUMENT_TOKEN_TO_BE_REPLACED

Tagged fun, mountains, Switzerland, travel, via ferrata, what to do in Switzerland

It May Happen On A Mountain

Normally I climb and hike to the accompaniment of cow bells. Their multi-pitched donging, resonating around mountain valleys, evokes a cellular rather than cerebral response and is at once calming and uplifting. Like an odour, it reaches something primitive in me.

The BB and I had taken the cable car up Piz Trovat, Switzerland.