Lessons From a Cheetah

Kruger had been a cornucopia, offering everything from insects to elephants, lizards to dung.

After a splendid morning bush walk we were visiting the private game park, Tshukudu, for an afternoon/evening drive. I was on tenterhooks. That is where the semi-tame cheetahs hang out. They were by the pool the previous day – but they come and go.

The buzz of my days of anticipatory pleasure was instantly replaced by my hole of loss…but at least I still had something cheetah-related in my psyche, brief though it was until that dissipated.

And there was plenty more to engage me.

The work of a hungry lion.

The giraffes managed to be at once ungainly and graceful as they cantered away.

Buffalo. There’s one in every family – you know who you are.

We’re a momentary curiosity but safe in the vehicle twenty metres away.

Sadly, they are prized by game hunters. The bullet-proof ‘boss’, the horn cap, of an adult male demands accuracy at close quarters when shooting them. Add to that the fact that they are determined and aggressive when wounded and, for those who find sport or personal aggrandisement in killing wild animals, the Cape buffalo becomes a trophy. Poaching and habitat loss contribute to a downward trend in their numbers though they are still ‘of least concern’.

And then, around a blind corner, as if planted for a movie shoot that we had chanced upon, were a mother rhinoceros and her calf. On our third day in the African bush we had finally found them. 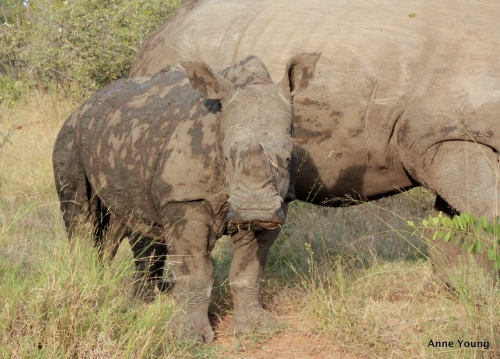 After that they were everywhere. Another mother had two youngsters – one hers, one that had joined them after its mother had birthed another calf.

The next group was overshadowed by something even more important: a cheetah on the far side of the waterhole; one of THE cheetahs!

As we watched, she got up and walked away from the humans towards the bush. No! Stay! Stay! She sat down. The guide said the cheetah’s move indicated that she had had enough and we must respect that. This time the loss held no sweetness for me; no, ‘Ah well, so be it, I have a pleasure anyway’. This was the loss of something manifested then made unattainable. It was harsh and naked and I beat at the decision.

We watched the young male rhinos instead. These two fellows will separate when aged about eight otherwise they’ll fight.

The rhinos ambled off

and we reversed away but instead of driving off, our guide took us around the waterhole to the cheetah! Dancing and singing and general jubilation inside my head.

She was draped with the grace and elegance of a model … but with more self-assurance.

I think it was that deep self-assurance, the at-one-ness, which most spoke to me. Perhaps that is part of the lure of places like Kruger – the chance to be in that presence, to be close to the essence and power of living. It’s the clarity, the who-I-am-ness that I like to be with. 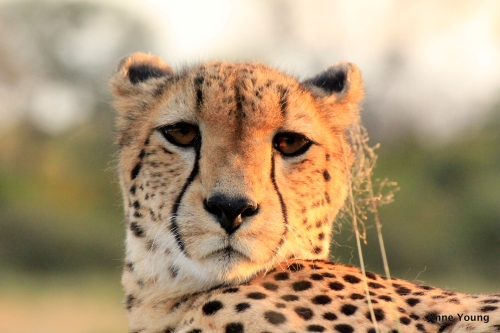 I have slipped away from that knowing. Human interactions are more frenetic, nuanced, frequent. Decisions are fraught. Bodies are out of kilter. We self-sabotage for complex reasons. We can easily tilt out of touch with our inner currency. Wild animals represent a part of our psyche that sometimes we long for as we dutifully fulfil the needs or perceived needs of others, subjugating or ignoring our own. It’s not only the simplicity of these animals’ lives that calls us, it’s their innate and unconscious self-honouring and Life-serving ways. 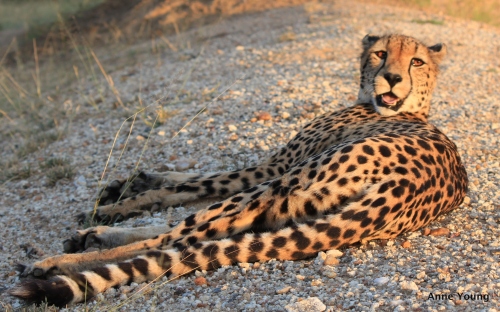 I squatted behind her and stroked her head. Cheetah hair is coarse and short. I became aware of a sound: rhythmic like a sine wave and almost inaudible, not in a whispery way but below some threshold not only involving decibels. It was a pure, round sound floating in the air below me. Silvery.

The cheetah was purring.

Because of those moments with her, something in me has altered, subtly yet powerfully. The experience colours my dreams.

Distressingly, it is the cheetah’s tameability (they are only the big cats with this characteristic) that is destroying the species. They are much sought after as pets by the wealthy in the Middle East. As many as two out of three of the mass of cubs poached each year die on their journey to confinement. In addition, trophy hunting is allowed in some African countries. Having lost about 90% of their population over the last century, cheetahs now only number around 10 000 in the wild. I understand the desire to have objects of beauty, indeed perfection, at hand, but much of what cheetahs have to give humans evaporates when they are removed from the wild. Prestige is no replacement for that. 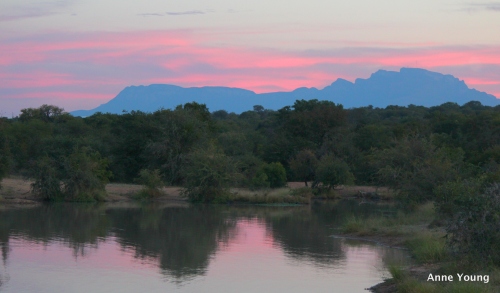 The Drakensberg Mountains, which had been pale pink, flat and pearlescent in the late afternoon sun, changed colour as evening progressed.

“Darkness falls on the African bush.” That, and its variations, is a phrase I utter to The BB, or simply myself, with some regularity. Its very predictability lends a kind of reverence to the situation and binds experiences from across time and place. Day’s end stealing over our garden in England is as sacred and generous as nightfall in a place that harbours some of the most splendid animals on Earth. 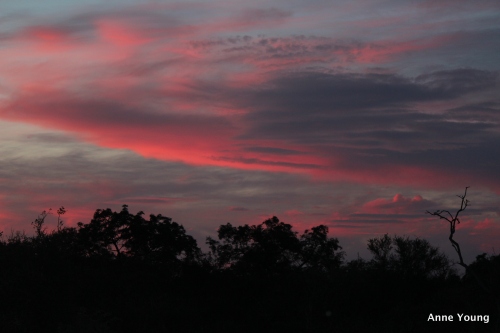 Two guides, kilometres apart, revved their engines. The area’s lion roared in territorial response. We charged down tracks, spotlight swinging, trying to locate him. The other vehicle was there first. We awaited our turn.

Our guide let him rest. He said it takes 10 to 20 minutes to recover from a roar (a similar time frame to mating). It was extraordinary a) to be so close (twenty metres or so) to a free lion and b) to have him completely unaffected by us.

Unaffected, that was, until our vehicle revved. He lifted his head and we were in for the treat of a lifetime. His chest was like an opera house. His sounds tumbled and tossed and jagged in there and out into the air. The air was his roar. His sides heaved. Nothing was stinted. 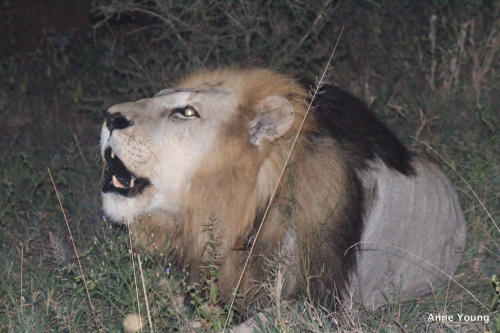 Then he lay down again and gently closed his eyes.

He had finished and our night had ended in the most fulfilling way. 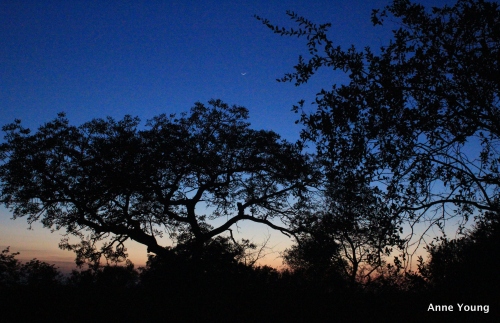 BRING ON THE PLASTIC ANIMALS

I had a toy hippo. Its body was a very hard plastic shell and it stood about 6cm high. It marched stiffly down slopes on wide flat feet, heel toe heel toe, mouth agape, stumpy teeth gleaming. It was one of the marvels of my tiny life.