Life in the Slow Lane

The BB is a punctual fellow, to say the least. This can be irritating for people like me who like to squeeze out the last few minutes before a departure*. It’s rare, however, for this trait to put us in danger.

We were outside our African lodge at 5.42am and saw the game-viewing vehicle drive away. It was our last morning; our last chance to spot animals close-up in the wild. There was no response from the driver when we called and cooeed so we ran after the vehicle, desperately and hopefully.

I saw the elephant, less than one hundred metres away, but The BB didn’t hear me warn him. He kept jogging towards it … it and its tusks. The vehicle was backing up. I called The BB again, trying to modulate my volume to reach him but not alert the animal. My brain amused itself with recollections of stories of elephant maulings. This killing machine wouldn’t take long to reach us.

Not a particularly well-composed photo but look at those colours.

The driver called to us that our vehicle was the one still parked. (He was late for his 5.30 departure and our driver was late arriving for our 5.45.) He instructed us to go back. The elephant kept chewing. It was still in their spotlight, unmoved, when we drove up in our vehicle ten minutes later.

There are places and people in the world that operate on their own time. One steps into those microcosms and, as much as one flails with expectations and glances at watches and frets about what is being missed, these people good-temperedly, and, it must be said, proudly, continue on their own schedule. South Africa is one of those places. Resist at your mental (and indeed, physical) peril. 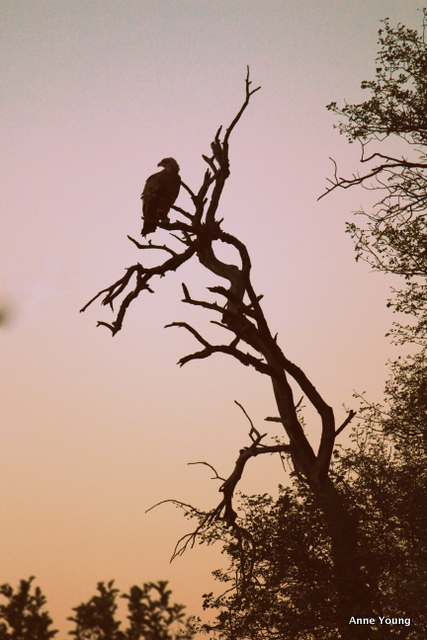 Feathers to the talons mark this as a ‘proper’ eagle.

We came upon a road block of the nicest kind – an ageing and relaxed elephant. He was unperturbed by the vehicles on either side.

He munched nonchalantly on thorns that can puncture tyres, childlike with his open mouth. 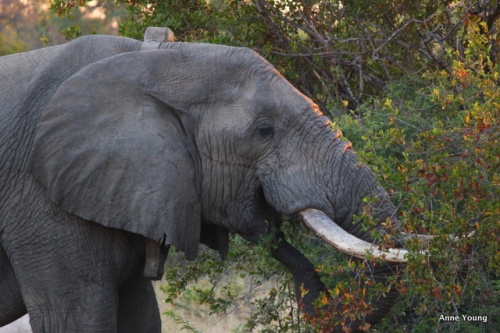 He is wearing a tracking collar.

Eventually, he ambled off down the track. The other vehicle beat a hasty retreat. We left too – that roadblock was like temporary road closures in our part of England: there for an indefinite period.

Away up a fence line, looking even taller than usual since we were in a dip, stood a giraffe.

As we neared, we spied his companion – a zebra foal, standing sideways to his front on: a jigsaw of splodges next to tiny, precise stripes.

The zebra’s little mane was an upturned brush. S/he wasn’t old enough to be dirty and looked like a toddler in clean clothes, crisply white. 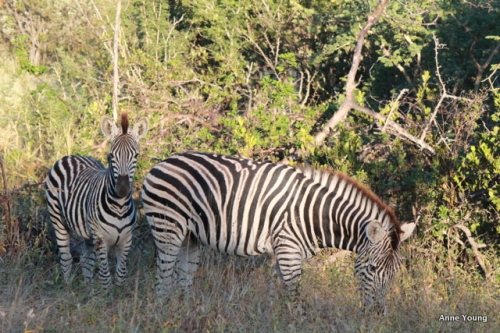 A great photo was lost as the driver ploughed on, not hearing my requests to stop and clearly not one with an eye to the photo opportunity. All our guides were very cooperative about halting when anyone asked for photos. 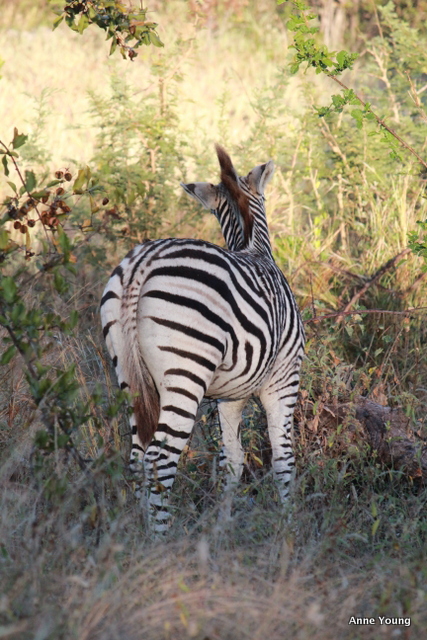 On the first morning, full of wonder at being in the African wild, I had taken my computer to a thatch-roofed, wooden gazebo to write emails. It was that time of delicate clarity when the air and land hold a curious mix of a night which is cooling and a day which is warming, as if they were two separate entities meeting for a few precious hours. Marula branches swayed wildly and I presumed a monkey was near. Sure enough, a little grey vervet was peering at me. It scampered along a branch, leapt onto another thatched roof and was joined by a larger monkey. For a while they regarded me from their vantage point then they trotted off. On the final morning the troupe were out in force at the breakfast area.

One is tempted to ascribe human emotions, to feel the kinship, to wonder whether they have any sense of us as similar beings. The real joy, however, is not to make humans the pivot of one’s view, but rather to see these primates as representatives of the rest of the animal kingdom and indicative of the possibility that intelligence and emotion are not the realm of only the few species in which we have yet discovered them.

* Usually whilst muttering, “There’s plenty of time,”and occasionally finding that there wasn’t.

Will We, Will We Not? The Search for African Animals

Part of me wondered if we’d see animals up close. We had four days in the Greater Kruger National Park but these were wild animals and the park is more than 20 000 square kilometres. It seemed theoretically possible for all animals to be distant from our vehicles. (Mathematicians, what say you?) When wandering around our lodge, Tremisana, in Balule (one of the private game parks adjoining Kruger without fences), the BB found photos taken by visitors. One showed lions next to the road 50 metres inside the front gate. ‘If only,’ I thought. 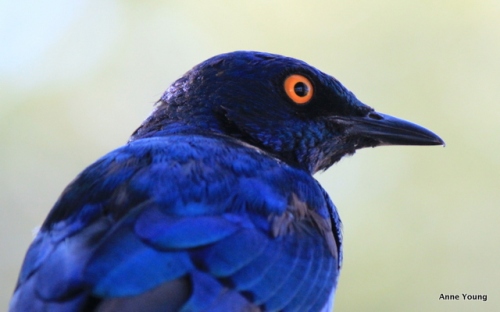 END_OF_DOCUMENT_TOKEN_TO_BE_REPLACED

BRING ON THE PLASTIC ANIMALS

I had a toy hippo. Its body was a very hard plastic shell and it stood about 6cm high. It marched stiffly down slopes on wide flat feet, heel toe heel toe, mouth agape, stumpy teeth gleaming. It was one of the marvels of my tiny life. 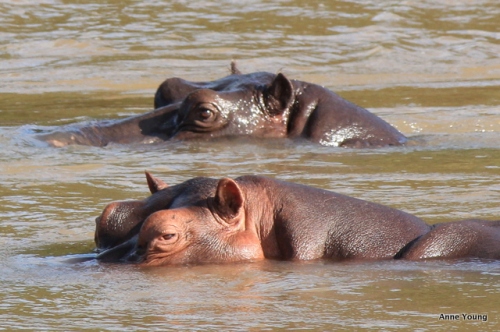