Leuven’s old city in Belgium is compact and delightful, (though it offers far fewer chocolate shops than Brugge).

The Pastorij B&B, a minute’s walk from the centre, set the tone for my stay. The religious memorabilia and the rooms named after archangels rather than numbered, points to its previous life as the pastor’s house. Proprietor Peter serves the best breakfast I have ever encountered.  Suffice to say that finally, after years of sizing it up in the supermarket and deciding against it on vague grounds of ‘I might not like it’ or ‘It might just be a marketing ploy, not as marvellously healthy as they say’ or ‘Perhaps some things are meant to remain a mystery’, I tried Yakult. It’s been for me like the maid in the mist, beckoning and repelling at the same time. I found it fabulous – sweet, tangy and gentle. I wanted to drink the entire supply and line up those sweet little bottles as if a mini-milkman had made a delivery directly to my breakfast cup. 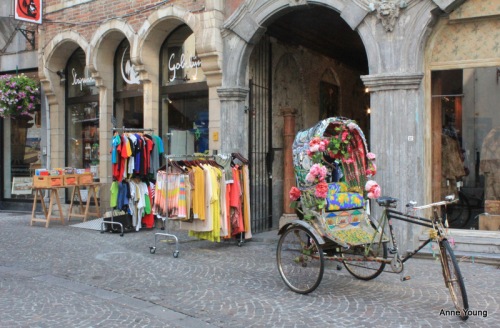 Sufficiently fortified, I entered the streets. The discoveries kept coming.

Years ago, I read Sarum by Edward Rutherford. It changed my perception of cathedrals and huge old buildings in general. Check out the details in this, the town hall.

The thoughts and talents of men (and possibly some women) live on through these buildings. In such a project, one is just a segment in the timeline. The baton is handed to you and by you to others. You can be present at conception or completion but not both. It’s telling that we, who can complete public buildings at a pace which allows one person to be involved in many in a lifetime, rarely extend the construction time a little to allow artisans and craftspeople to bring something beyond function to a building.

I’ve written previously about dates on buildings but check this tenacious tree.

This building at the end of Grote Markt with the shadows of the town hall falling upon it, is like a dolls’ house with all those windows just begging to be opened to a giant and curious eye. 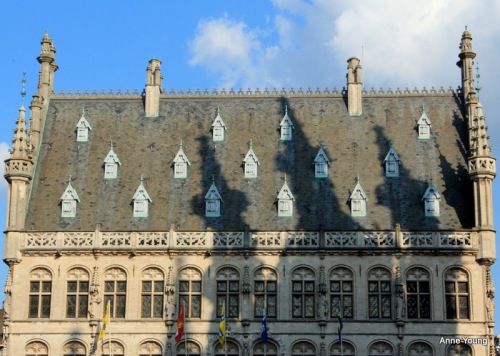 I have been unable to establish what the statue below references (information appreciated). Apparently the elders of Leuven once had rich trade with the Moors. However, they committed abuses in the Congo Free State. It appears the Belgians got on well with goblins though – at least, the goblins profited.

Cloth was once an important part of the city’s wealth but that diminished in the 1300s. The establishment of the Catholic university (the oldest in the world today) in 1425 revived fortunes. Where there are students there is beer and in the 1700s (after a dry few centuries) a brewery was established on the outskirts of the city. You may know it through its Stella Artois. There are plenty of different kinds of beers lurking in pubs and shops.

The town is full of surprises (more in an upcoming post). For one thing, the university library is something of a war memorial.

It’s not often one sees a statue of a mother brandishing a sword in one hand whilst holding an infant in the other. And it’s even less often that the mother is Mary and the infant is you-know-who. But there they are on the library. Oh, and she’s vanquishing the German eagle. And by ‘vanquishing’ I mean standing on and poking with her sword. Archangels Michael and Raphael are doing their bits nearby and standing in the wings are the fauna emblems of Belgium’s allies.

In August 1914,German soldiers set fire to the fourteenth century University Hall and its eighteenth century library wing. The destruction of 230,000 volumes including Gothic and Renaissance manuscripts, 750 medieval manuscripts, and more than 1,000 incunabula (books printed before 1501) as well as coins, medals, paintings and sculptures, shocked the world. A new library was built, largely with American and British funds.  It re-opened in 1928, its new stock again including precious volumes. German troops set the collection ablaze in 1940.

American students aided the restocking of the library and are remembered in beautiful fonts.

Nearby is the Friendship Balloon by Danny Tulkens, commissioned by the Association of Birth Years – groups of men forming to take a decade together to prepare for turning fifty.The association is UNESCO-listed.

As we had dinner in one of the squillions of restaurants in the old city, the library tower carillon (one of the largest in the world) rang out. Once a week for an hour the carillonneur plays requests.

Whether you drink yoghurt or beer; want to visit a glorious old building, a statue or the longest bar in the world, Leuven is one of those places so full of riches that a single day’s visit is simply not enough.

This entry was posted in Belgium and tagged architecture, Belgium, Leuven, old cities, travel, university library, what to do in Leuven. Bookmark the permalink.

2 responses to “Lurking in Leuven”