Treasures From the Bay

Nothing says, “You are entering the realm of storybook, drama and quirkiness” so much as a sign like this:

These street alarm boxes from the late 1800s are still used for emergency calls. That bygone-era exterior is a deceptive front for the internal efficiency. They connect directly to the nearest fire station, providing the box number and hence location. 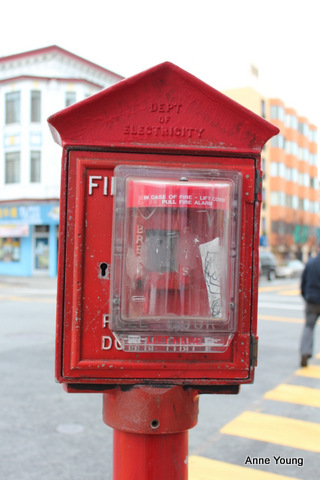 The highrise building on the other side of the street inverts in this fire-engine bell.

One hears the city cable cars when they are hills away. Their rattle and click creates a sense of displacement – the sound emanates from near one’s feet but no vehicle is in sight. It’s as though they’re invisible or embedded in the road. Inside the cable car, a burly man does strenuous and skilful things with a lever while, at the back, a less-bulky fellow collects fares, manages people and operates the rear brakes.

People emerge, wizard-like, from the mists that rise and twist at intersections. 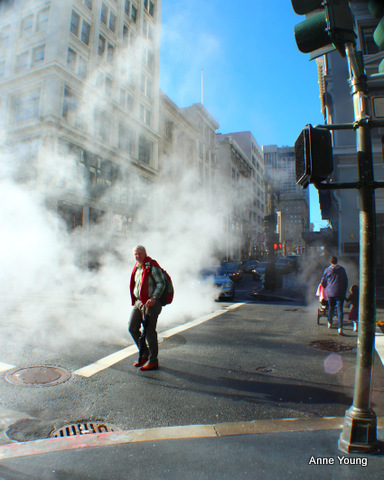 Shoppers at Fisherman’s Wharf have their purchases applauded with barks and slaps from the local seal troupe.

These dinky little stands waft chowder, pretzels and other gustatory Americanisms. I almost expected them to scamper off on bandy legs.

This sums up the kind of city we’re talking about.

On a bus I heard a young man run out his litany of woes. “I’m not sure if I like my job, I have little money and no girlfriend but…” and here his voice cheered, “I am living in San Francisco!”

This is a city that gives.

14 responses to “Treasures From the Bay”