The Case For Chess As An Olympic Sport

I’ve always been a little doubtful about the proposition that chess should be included in the Olympics. All the current and previously included activities are physically active or at least involve standing up. Chess simply does not fit that category. It’s not actually exercise is it? 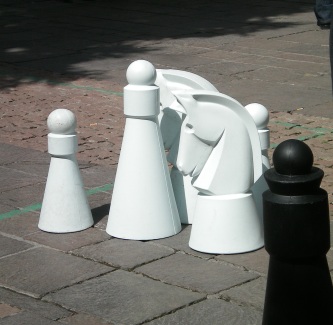 However, a couple of venues in Zurich have given me pause for thought. In squares in the suburbs of Oerlikon and in Lindenhof, people play with large wooden pieces. Sure, it’s not exactly shot-put or weightlifting but the pieces do require a full-handed lift. And their size guarantees spectators an easy view of the game.

In Oerlikon, middle-aged and elderly men get heated, contemplate, pace and laugh. There is even the occasional cheer. Children gallop around, tourists saunter past and music from the world markets blares.

Yes, okay. That man did not leave his house wearing a fake beard, a toupe and a festival mask. And yes, the other man does not actually own that hat (although I think it suits him). I'm thinking privacy, people.

Lindenhof, with its glorious views of Zurich, is the perfect place for chess. It was once the site of a Roman fort (see a copy of the second century gravestone found there, on Pfalzgasse) and a castle built by the grandson of Charlemagne in the ninth century. According to legend, it was the sight of the women of the city, mistaken for male soldiers, sharpening spears on Lindenhof that sent would-be conquerors scarpering in 1291. The residents of Zurich gathered there in 1798 for the sealing of the Helvetic Constitution which was an attempt to unite the cantons of Switzerland under a central authority. Now a peaceful square rimmed by a low wall, it sees battles, castles and agreements of a different sort. 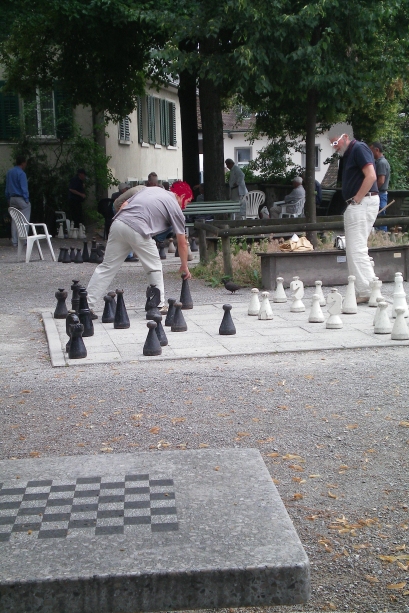 On one of the days I am there I watch a cliff-hanger of a game between two men. One wears a black cap over his thick grey hair and watches the play with alert and thoughtful eyes. His slightly younger opponent, dressed in a black coat and white shirt above jeans, looks like a business owner on his lunch break. They are both well-shod and wear thick wedding rings. I ask their permission to photograph and they chat to me awhile. 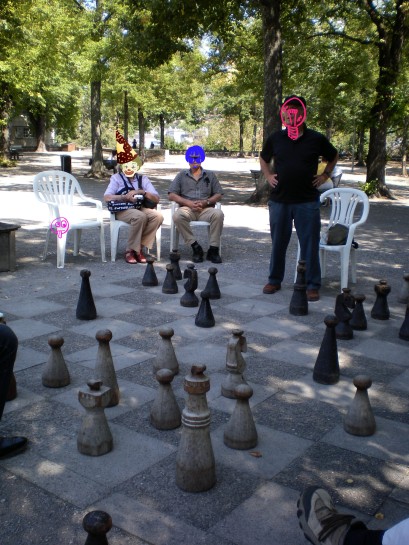 You know who you are, Mum and Dad.

Sometimes the game moves so fast they don’t have time to put their taken pieces aside before they stride in for their next turn. Sometimes they lean back or perch on their white plastic chairs and ponder. Sometimes they squat at the height of the pieces as though gaining perspective through the wooden eyes and minds. Sometimes they stand and survey, as a general his army.

We’re twenty minutes in. The older bloke is in a spot. Both queens

fall. Both kings advance. The players strategise from their ends. A black king, a castle and two pawns stare down a white of each. The surrounding crowd is immobile with concentration. The linden trees rustle. Sun dapples the ‘board’. A church bell tolls.

The old bloke drains the bottle of water he has held close to his chest throughout the game. He pulls an apple out of his bag. Coat-man leans in decisively. There is a scuffle of pieces. The spectators’ eyes dart from one to the other. No pieces are taken. There’s a lull then coat-man looks at his opponent and nods almost imperceptibly. The players return the pieces to their starting positions.

Now that is a spectator sport.

11 responses to “The Case For Chess As An Olympic Sport”