When visiting a castle, one does expect crenellated walls and towers but Castle Howard was not constructed for defence. The 3rd Earl of Carlisle, Charles Howard, commissioned it for aesthetic pleasure and self-congratulation. This grand asymmetrical house is apparently listed as one of the world’s top ten greatest mansions in Lonely Planet’s 1,000 Ultimate Sights.

The earl demolished the ruins of the nearby Henderskelfe Castle and the associated (inhabited) village to create a pleasing view. Building started in 1701 and temporarily ceased, unfinished, in 1709 to concentrate on the garden. The west wing was finally completed and decorated, a couple of earls later, by 1812. The new wing, in Palladian style, was a sombre contrast to the original Baroque and raised a few eyebrows at the time. Nevertheless, as those who viewed Brideshead Revisited either as a TV series in 1981 or as a movie in 2008 know, this is a magnificent building. 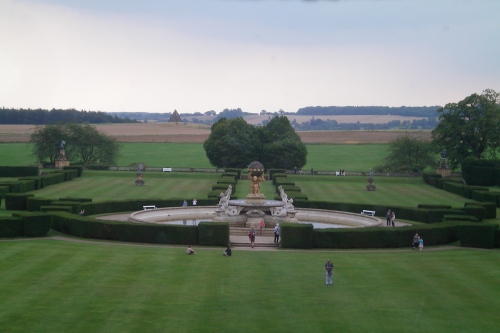 It is still home to the Howard family. I wondered what it must be like as a child in that huge network of rooms. Do you treat the valuable art works with deference or are they simply the backdrop to your childhood? Are you allowed to answer the invitation of the polished floors to run and skid down their length between antiques? Do you lay down rules for hide and seek – “Today, east wing only, first floor” – so you have a fighting chance of finding your quarry? As a parent, do you attach a little GPS to each child so you can monitor their location or equip them with a two-way radio?

Visitors can enjoy parts of the house with the help of stationed guides.  The estate houses 200 listed buildings and monuments, an adventure playground and several lakes, one of which features boat trips. Wander at leisure or join a free tour. An eclectic mix of events and exhibitions are held through the year. Bring your family, your staff, your wedding party, your dog.

The gardens are glorious: healthy hedges, abundant borders, ornamental vegetables, gorgeous gates, huge velvety bumble bees. The day we visited, it rained. The BB and I huddled beneath an archway in the hedge which, although dense, was ultimately no match for the rain. But it didn’t matter. Stately homes  and gardens are lovely whatever the weather.