Colours on the Camargue

One of the books I remember with pleasure from my childhood was set in the Camargue, the Rhone delta near Arles in the south of France. The geography was of little importance then. What mattered was the story of horses fording the waters from their island to the mainland.

Knowing we would need to spend the night in that area on the way from Switzerland to Spain, the part of me that kept the book in memory wanted to see the Camargue and the horses in it. I also read on the Arles website  that the fighting  bulls are bred there and that flamingos inhabit the area. White, black, pink – that would be a pleasing trio to sight.

Our man at The Cours hotel in St Gilles (very clean with room size perfectly adequate, though not generous) suggested we visit a park, Mejanes  (website in French). The BB, our companion and I wondered whether the size precluded the wildness we were seeking so opted for the bird park (Le Parc Ornithologique de Pont de Gau) instead. 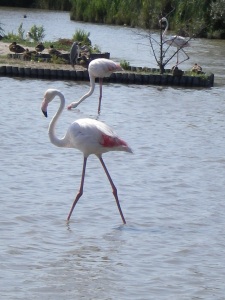 Flamingoes in abundance. Tick. I was surprised at their paleness. Was this due to not enough blue-green algae or being a different ‘breed’ of flamingo from those the mighty David A. films in South America? However, they do have a marvellous flash of pink – which The BB insisted was orange – on their wings. Our companion and I were blue in the face with protestation about the colour but The BB was barely moved.

I was fascinated by flamingos feeding. Some plunked their heads underwater then trod up and down on string-thin legs to disturb their prey. Others swished their beaks back and forth just under the water. Both methods serve to allow filter feeding.

There were all sorts of birds actually. And nutrias. I had no idea that was the 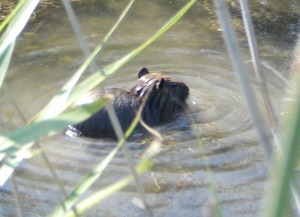 name of an animal. Basically, a beavery, water-ratty, quokka-y creature with long coarse hair and a long thin tail. I have photos of the places along the path where the first two were foraging before they scarpered after they heard me and before my camera kicked in. If I look carefully, I can see the skid marks on the ground. There are myriad tunnels they have created in the dense shore vegetation for entrance and escape. We subsequently saw a few, much more relaxed, individuals nibbling in the water.

The BB saw, and I quote, “a neon green lizard” but let’s face it, with his track record of colour discernment, it could have been brick red. Long, broad, slow-moving fish raised large bubbles in the creeks. Maybe they were foraging in the silt as well. 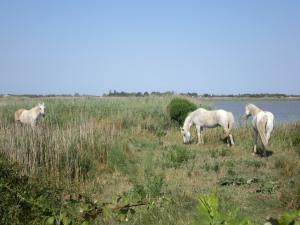 And there were horses. On the drive from our hotel we saw many riding outlets with white horses saddled awaiting customers. Half a tick. Then, in the more distant sections of the park, I found what I was really after – horses roaming the Camargue. Not in great mobs, as in my story, but unsaddled and possibly free.

Also on the drive down we flashed past a couple of paddocks of bulls. Quite fearsome creatures actually with forward-facing horns honed to needle points. Excellent for spearing things I thought.All the bulls I’ve ever seen in the flesh have been much milder creatures with nicely blunt, upward pointing horns. No harming of flies, let alone humans – even under extreme provocation in, let’s say, a ring of screaming spectators.

So I had enjoyed my trio of colours. But it didn’t end there.

Saintes Marie de la Mer, further south, is a cheerful holiday town drawing people to the Mediterranean. It’s not exactly what the Club Med brochures had lead me to expect. Obviously the beachgoers hadn’t seen the brochures. They were perfectly content lolling on what almost amounted to mud. A good rain, a few tastefully discreet tents and one could set up a thriving mud bath business on the ‘beach’.

The sand-like substance, strewn with people sunning themselves, was grey-brown. The fact that it was churned in one area by heavy vehicle (tractor?) tyres added to the impression of mud – as though someone had sunk so far into it they’d had to be pulled out.

Limestone walls divided the swimming area into neat sections, making it a great place for families, but forget about taking the board out for a whirl.

We found a seaside restaurant serving a dinner buffet. I would have eaten there for the table colours alone. 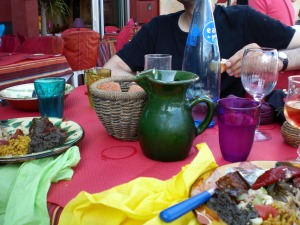 So, I found my animals and I found my geography, thereby incidentally completing another trio for me – the Rhone’s glacial beginnings in Switzerland, the Rhone as river through various countries and the Rhone as French delta, flowing into the sea.

3 responses to “Colours on the Camargue”